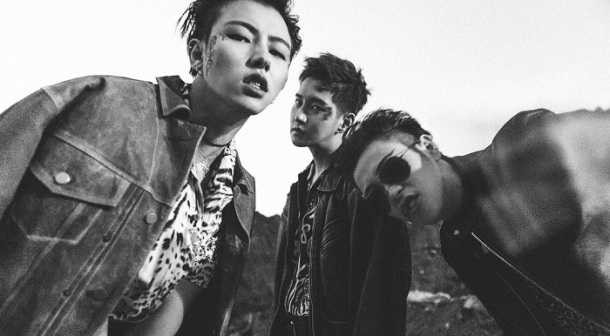 Given last week’s funky and laidback pre-release, it was only a matter of time before Bastarz returned with something closer to last year’s hard-hitting Zero For Conduct. Make It Rain is definitely that track, slamming listeners over the head with an aggressive, grimy hip-hop sound.

Block B made their name on edgy material, but even their hardest tracks retained a sense of playful creativity that grounded them in personality. Hallucinogenic fever dream music video aside, Make It Rain doesn’t feel particularly fun. Yes, its explosive beat and battle-at-the-thunderdome synths rattle the windows, but there’s little wit or surprise to be found in the track’s overwhelming bombast. It seems intent in proving its street cred, from the sounds of blitzing gunfire to the carnival barking throughout. But the thing is, it’s kind of like a pitbull — tough on the outside, but ultimately pretty docile.

With that said, now that Block B has transitioned to a softer sound, Make It Rain is the exact style a sub-unit like Bastarz should be pursuing. It’s by no means a bad song. There’s a certain amount of exhilaration to be found in its go-for-broke aural chaos. The members themselves find plenty to latch onto in the whirlwind, especially P.O., whose gruff delivery is made for tracks like this. But Zero For Conduct executed this style ten times more effectively. Of course, that track had Zico at the producing helm, essentially branding it as an extension of the Block B sound. Conversely, Make It Rain was composed by r&b sensation DEAN. The track’s heavy sound is somewhat uncharacteristic for him, which likely explains why it feels more like a lesser copy than a true original.

2 thoughts on “Song Review: Block B – Bastarz – Make It Rain”