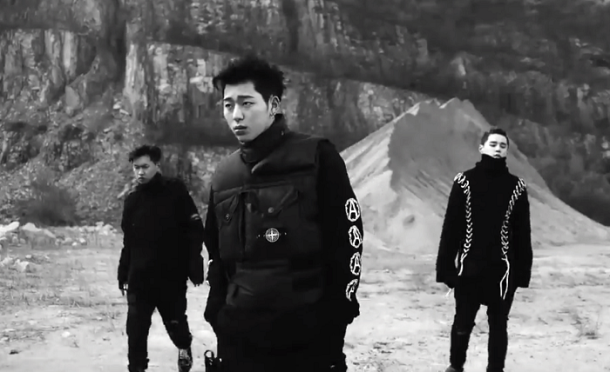 Block B‘s Zico has become one of Korea’s most prolific hit-makers, routinely releasing hip-hop tracks of various styles to massive success. His newest single is a collaboration with fellow “it” boys Crush and DEAN. By name recognition alone, the trio is a real supergroup, representing three of the biggest names in this particular k-pop sub-genre. Bermuda Triangle was bound to be a hit before it was even released, but the song’s actual content is a mixed bag of powerful — but disconnected — moments.

Bermuda Triangle opens with its strongest refrain. DEAN gives a commanding performance, delivering his vocal with an intensity that instantly builds hype for what’s to come next. Since this is first and foremost a Zico solo track, most of the running time is devoted to his rap verses. Unfortunately, these are Triangle‘s most uninteresting moments. The slightly off-tempo beat is novel in theory, but the end result feels overly clattered, lacking a deeper tone that might have anchored the beat. I like the warped vocal samples used towards the track’s end, but DEAN and Crush’s melody deserves an even more dramatic instrumental.

Triangle‘s main issue is that it feels like less than the sum of its parts. Crush isn’t given a whole lot to do, but he makes the most of his cameo, giving a more attitude-infused performance than we’re accustomed to from him. DEAN’s bravado-laced segments bookend the song in strong fashion, but none of these moments mesh quite as seamlessly as they could have, resulting in a song that feels more like a fascinating experiment than the world-conquering collaboration it might have been.