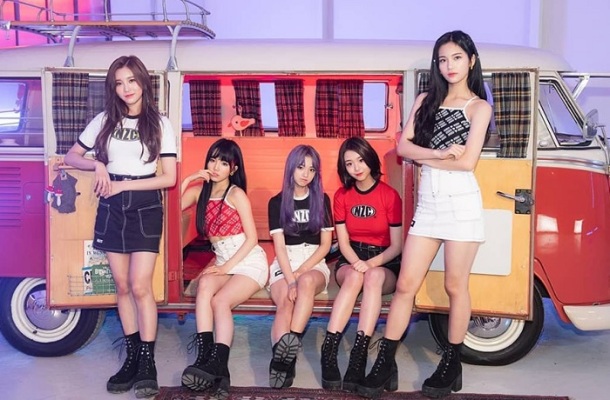 Girl group Busters have been around since 2017, but this is the first time I’m writing about them here. As with most rookies from small agencies, their music has tended to blend in with the crowd, lacking any discernible identity of its own. This is despite a unique origin story. The group was formed to promote (and star in) anime series Idol Ranger Power Busters, which — judging from the title alone — is something I need to watch immediately. Given this tie-in, the girls are listed as a “project group.” However, we’re two years into their career and the comebacks keep happening. So, I’m not sure if they have a pre-identified expiration date or not.

Either way, I wish that Busters’ music lived up to their anime-fueled back story. The K-pop market could do with a sequel to Crayon Pop’s epic FM comeback, complete with cheesy outfits and special effects. Instead, Busters have opted for a generic, innocent girl group concept. Pinky Promise (핑키프로미스) is as light and innocuous as its title suggests, and listeners’ enjoyment will rest entirely on their preference toward this kind of style.

On the plus side, Pinky Promise’s instrumental is surprisingly lush, dripping synths over every inch of the track. The verses have an appeal similar to Lovelyz’ discography, offering a delicate arrangement and wistful melody that never completely succumbs to chirpy aegyo. Promise’s chorus is pleasant as well, though it doesn’t do enough to set itself apart from the rest of the track. The refrain is serviceable, if unremarkable, and the girls sell it with the kind of ethereal delivery expected for this style of song. It’s a solid comeback, but also a missed opportunity to stand out within a veritable army of like-minded girl groups. Let’s just call this group “Power Busters” instead and get to the fun stuff.