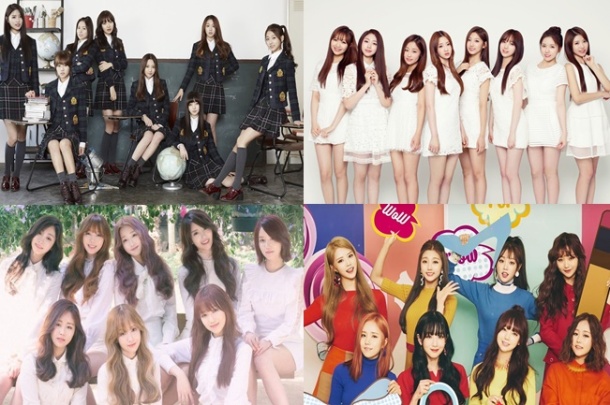 Debuting in 2014 as Woollim Entertainment’s first girl group, Lovelyz quickly rose to fame on their quirky synth-pop sound. Though they’re most known for a light, cutesy image, their music has experimented with different tones as the group has matured. With only eight full-group promotional releases, I had to cheat a bit and add two solo tracks to the list. Thankfully, their quality is right up there with the consistently solid discography the girls have given us.

An affecting pre-release ballad for member Jin, Gone’s lilting melody is one of the most emotional moments in Lovelyz’ discography.

Propelled by a sweeping strings refrain, Destiny brought a new maturity to the group’s work while retaining their synth-drenched sound. (full review)

The first time listeners had a glimpse of Lovelyz as a whole was through the delicate balladry of Goodnight Like Yesterday. It’s a subtle, lullaby-esque introduction to the k-pop world.

Lovelyz have always had a fairytale sound, but Hi’s strings-assisted trot is the group at their lightest and fluffiest.

Though not a full-group track, Jiae’s Delight is the only time producers Sweetune have been brought in for a promotional release. It boasts one of the strongest, 80’s-inspired melodies the girls have given us.

Most would consider Candy Jelly Love the group’s full-fledged debut song, and its sugary head-rush of pop magic certainly defined Lovelyz from the get-go. You can’t beat that gorgeous synth arpeggio that drives the track’s instrumental.

Lovelyz’ biggest hit to date, and an undeniably fun blast of addictive girl group synth pop. Ah-Choo feels like the perfect distillation of what Lovelyz can bring to the k-pop world, filled to the brim with sing-along hooks and incessantly anthemic synth riffs.

Taking a brief detour from their more frequent collaborators, Lovelyz released their warmest, biggest pop melody just as winter was about to start. For You is classic k-pop at its best, built on a densely packed instrumental that surges forward as the track’s hopeful, ebullient chorus reaches sky high. (full review)

25 thoughts on “The Top Ten Best Songs by LOVELYZ”