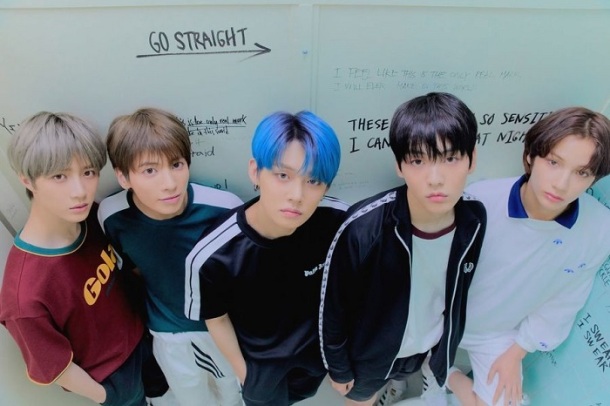 It’s been a long road to TXT’s first comeback. Originally scheduled for August, Run Away (9와 4분의 3 승강장에서 너를 기다려) arrives after two postponements, increasing anticipation for where the group’s music would go next. TXT has been pitched as a lighter, more pop-informed version of agency-mates BTS, and this approach resulted in a knockout debut. Crown remains one of 2019’s most ebullient tracks, but the guys have taken an edgier route for their follow-up. Run Away feels like the spiritual successor to BTS’ own Run, as filtered through TXT’s youthful vision.

Homage or not, Run Away was worth the wait. Its rock-infused arrangement is a more daring stylistic shift than I would have expected, but still adheres to many of the elements that made TXT’s debut such a treat. After a brief, mysterious opening that echoes the morse code motif of Crown, Run Away bursts right into its propulsive beat. The vocals here (and throughout the song) are much more processed than I would’ve liked — which, funny enough, was also an issue with BTS’s Run — but the melody is strong and instantly anthemic. TXT have the kind of bright, clear timbres that I prefer in pop songs, and they bolster Run Away with an effortless confidence.

Given that this is the lead track of an album entitled Magic, Run Away occasionally dips into fanciful territory. Its spell-casting pre-chorus is jarring the first time through, but gives the song a unique touch that never waylays the energy. A half-time breakdown during the second verse is unnecessary but relatively harmless. Unfortunately, these trendy moments are par for the course in 2019. I just have to learn to live with them.

Run Away’s true star is its two-part chorus. It’s here that the guitar comes in, boosting an already potent hook and giving the track just the grit it needs. The melody is incredibly catchy — probably one of the most instantly memorable refrains we’ve heard all year. This is the power of a good chorus, and the reason why I’m such a staunch protester of EDM drops posing as hooks. TXT are one of several new groups bringing back the appeal of classic K-pop, and Run Away is another bold step in the right direction.