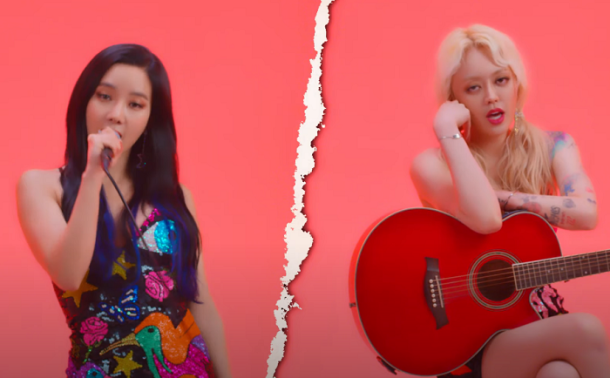 KEEMBO consists of ex-Spica members Boa and Bohyung, re-debuting as a duo. They’ve gotten precious little attention so far, but I’m here to change that for one very important reason: they’ve brought my lord and savior (and occasional Spica collaborator) Sweetune along for the ride! Sweetune have been MIA for too long now, only popping up for a bit of indie idol rock here or a ballad there, including KEEMBO’s own Thank You, Anyway last month. And while Scandalous is not quite an undisputed Sweetune classic, it’s their first song in awhile that carries the upbeat energy I’ve been missing.

Scandalous melds bright pop rock with a synth backbone, drawing on the production team’s trademark vocal layering and ear for an effortless hook. The combination of acoustic guitar, strings and electronic elements makes for a buoyant blast. There’s some real interesting things happening in the second verse, where the strings are arranged almost like a traditional jig. This seems like it would be at odds with the track’s overall sound, but Sweetune are production masters for a reason.

Though much of Scandalous’s chorus is driven by instrumentation, the song hinges on a potent, singalong hook. It’s portioned sparingly throughout the track, but returns in a big way for the final chorus. It’s here that we’re treated to the kind of vocal arrangement Sweetune have made their name on. It helps that both Boa and Bohyung are incredible vocalists, and already accustomed to blending effortlessly. Judging from the second verse, Boa’s also a pretty charismatic rapper. Scandalous may not make waves on the charts, but for a Sweetune aficionado like myself it’s a welcome return to form that (hopefully) hints at greater things to come.