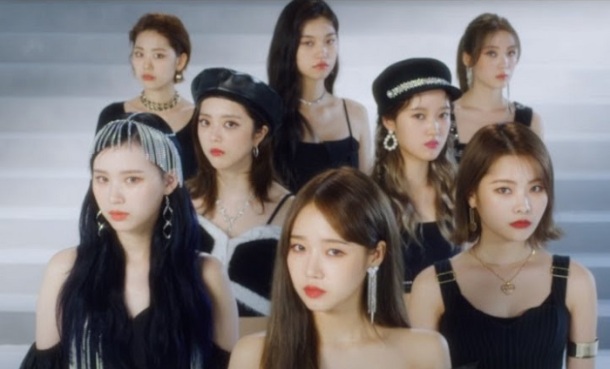 For me, Weki Meki’s discography has been extremely hit or miss. For every Tiki Taka or Picky Picky, there’s a Dazzle Dazzle. Apparently, they love repetitive titles, as well! “Oopsy” might as well be a thinly veiled apology for some of their more regrettable material. In reality, it’s the title of their newest single, and it finds the group somewhere in between their satisfying and cloying sides.

Oopsy grooves on a funky, bass-driven beat, overlayed with splashes of synth and (what else?) trap beats. The instrumental would have been stronger if focused more heavily on its bassline, which ends up buried in the mix. Still, the energy here is good – sassy and enjoyable. The girls themselves dial back on the chirpy aegyo that made Dazzle Dazzle such a chore to get through. So, why isn’t Oopsy hitting me harder?

I think in this case, it comes down to that oft-ignored element in modern K-pop: melody. Oopsy is melodic. Or, at least the group’s phrasing carries the same hallmarks of a melody. But, from the verses to the chorus, the whole track feels more like sing-talk than actual pop refrains. The hook comes close, offering a few catchy turns. But, the verses are utterly forgettable time-fillers. There’s just no consistent structure, so when their delivery approaches melodic, the result just kind of fizzles into nothing. K-pop is great at showcasing charisma and verve, but songs like this forget that those qualities are all too fleeting if not tethered to potent songwriting. Oopsy is harmless enough, but there’s nothing to really sink your teeth into.