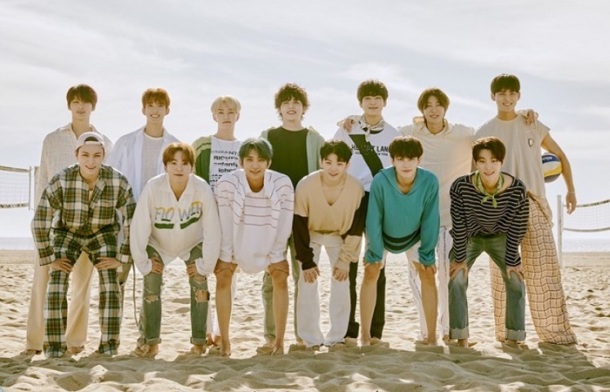 Back in 2018, Seventeen released a b-side (Run To You) that many described as sounding like the opening to an anime. With Together, they’ve finally followed up on that style.

Now, “anime music” is actually more varied than you might think. So many J-pop singles are tied to anime in one way or another, but when one thinks of the classic anime sound, it’s likely to involve surging guitars, a brisk tempo and a sense of anthemic heft. Together largely opts for synths and piano over guitar, but it ticks those other two boxes quite nicely.

With title track Left & Right, I bemoaned the simplistic (some would even say dumbed down) hook at its core. In contrast, Together builds toward a satisfying, fleshed out chorus that forgoes gimmickry for a more substantial structure. Its sound is too niche to be a single (at least in Korea), but there are plenty of moments that hearken back to classic Seventeen of the past. Some of Together’s melodic turns almost remind me of Pretty U, and its chorused, celebratory chants recall the exuberant energy of Mansae. Together is nowhere near as satisfying as either of those tracks, but I appreciate its unflagging spirit. Never once does the song slow or shift. Right from the start, it knows exactly what it wants to be. That consistency is comforting, even if it may grow a bit repetitive by the end.

12 thoughts on “Buried Treasure: Seventeen – Together”