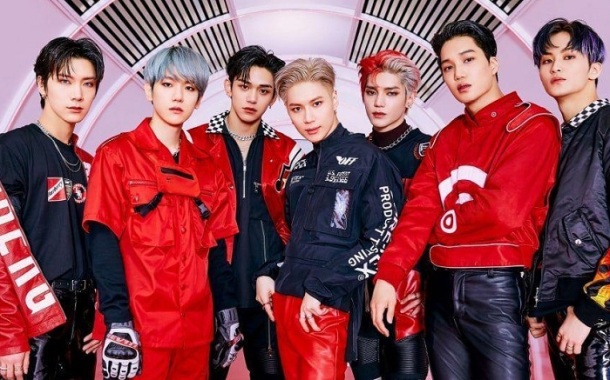 I have a weird sort of respect for SuperM. Sure, the project is about as inorganic as you can imagine, bringing together some of SM Entertainment’s most popular performers for an agency-forged super group. But if you’re going to take this approach, the music had better sound as big and over-the-top as its performers demand.

It would have been so easy for SuperM to churn out some trend-chasing piece of American pop, particularly since they were created with an eye for the western pop market. But, they took the exact opposite approach with last year’s Jopping. Rather than kowtow to a misguided sense of musical “authenticity,” they embraced artifice in all its bombastic glory. That’s one of the qualities that first drew me to idol pop. There’s no “guilty” in this pleasure, and I respect SuperM for sticking to their guns.

Pre-release single 100 feels like a natural extension from their excellent 2019 debut, delivering all the musical firepower they can muster. It’s like an Avengers film – stuffed to the brim with noise and action and knowing humor. This isn’t an exercise in gazing at darkly-lit statues, the color of which calls back to years of naval-gazing lore. This is popcorn pop music, explosions and all. And while the song might not have much of a chorus, it’s got a crackle of energy that compensates.

Composed by a team of familiar names (in a Marvel universe, Yoo Young-Jin would certainly be their Nick Fury), 100 crafts a convincing line through multiple eras of the patented SM Performance style. The electro-funk that underlines its verses is pure SHINee circa 2013. The guitar distortion is a longtime favorite of Young-Jin’s, hearkening all the way back to his H.O.T. days. The ridiculously overblown power notes are the stuff of TVXQ legend. In this way, 100 becomes more than its meager melody might suggest. It has an army of history behind it. An arsenal, of sorts.

Filtered through SuperM’s enviable cast of performers, this hodgepodge victory lap is pure joy. Mark opens verse one with his reliably magnetic rap, volleying the rapid-fire verses to Taeyong, Kai and Lucas. Each brings an undeniable charisma to their segments, however brief they might be. Given that 100 is primarily hip-hop focused, vocalists Baekhyun, Taemin and Ten aren’t given quite as much to do. However, all three manage showstopper moments of their own. It’s so nice to hear Baekhyun really let it rip again. It’s been awhile since we’ve heard him perform in such a dramatic way.

100 will likely be derided in more pretentious circles, and I couldn’t care less. This is unabashed fun — embracing the ridiculous, assured in its own silliness. And when it comes down to it, that’s a quality that’s been missing in too many big-name K-pop releases this year.