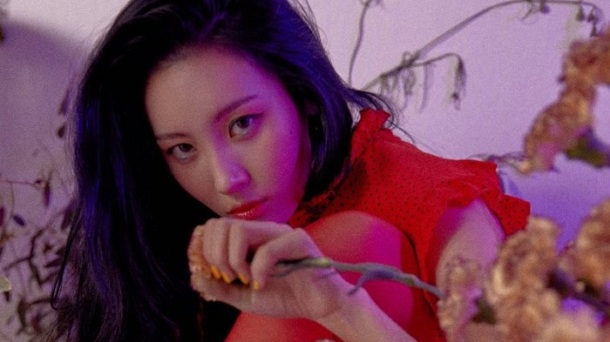 If there was one song in 2017 that I severely under-rated, it would be Sunmi’s Gashina. While I didn’t love it at first, the track became something of a national phenomenon. Utter ubiquity goes a long way in selling a song, and coupled with its addictive choreography, Gashina rightfully stamped its place in last year’s history books. Of course, this just means that follow-up Heroine (주인공) arrives with massive expectations. And while it won’t likely inspire the same amount of cover-dance fervor, it’s a tremendous piece of cinematic k-pop.

I spent the better part of 2017 railing against tropical house, and will probably continue to do so until its trendy sound is buried once and for all. But as with any sub-genre, there’s a time and a place where it works wonders. Heroine‘s dramatic synth riff feels perfectly realized, even with those incessant electro-chirps. It helps that Sunmi is such a captivating performer. Even without the visual, her supple tone pulls you in. It would be easy to play it overly cool for a song like this, but Sunmi has a way of injecting a sense of anxiety into her vocalization. Her singing is powerful, but sharpened like the frayed edges of an exposed nerve. Beyond the obvious charisma, a performance like Heroine‘s feels like a gasp for air. That sense of rawness powers the track.

Heroine‘s instrumental follows suit, punctuating the melody with bursts of percussion that keep the arrangement constantly off-guard. There’s a sense of grandness to the production, highlighted by the chorused vocals during the hook. It draws a tricky line between atmospheric, minimalist and bombastic, nailing all three in different measures. If I had one minor complaint, I wish the song would have built to a grander climax. There’s little to distinguish its final moments from what came before. But with a track this dynamic, that’s not too big of a concern.