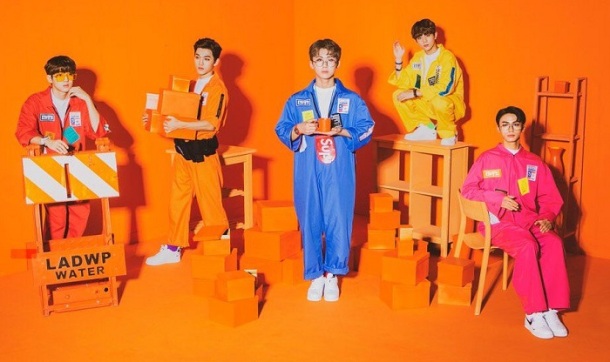 Pre-debuts seem to be all the rage nowadays, and the latest group to tease music before officially debuting is Dongkiz. Named after their agency (Dongyo Entertainment), they’re definitively in need of a cooler moniker. “Dongkiz” is pretty lame and unfortunately sounds too much like “donkeys.” But, K-pop has never been averse to awkward group names. I’m sure I’ll get used to it eventually, especially if their music lives up to the potential displayed on Nom.

Dongkiz is a very young group, with four of its five members being born in the 2000’s. We’re going to be seeing more and more of this, and I hope it brings about a renewed focus on upbeat, youthful material. Nom certainly points toward this concept. Its bright, brassy hook has a similar energy to Uptown Funk or Very Nice. It isn’t pulled off with quite as much flair, but the fact that it tries at all is cause for celebration.

From the get-go, Nom bursts with energy. The song opens with a chugging funk guitar riff, which remains present throughout the entire track — even building to a brief, but electrifying, solo during the climax. This is further fleshed out by a strong dance beat and walls of bombastic brass. There’s still some fine tuning to be done when it comes to the final product, but this is the exact sound I’ve been missing from much of 2018’s subdued K-pop releases. Nom throws it all out there, never offering respite from its boundless intensity. Its melody isn’t all that memorable, but that’s less of an issue with an instrumental this engaging. Hopefully they won’t abandon this winning sound for their debut early next year.