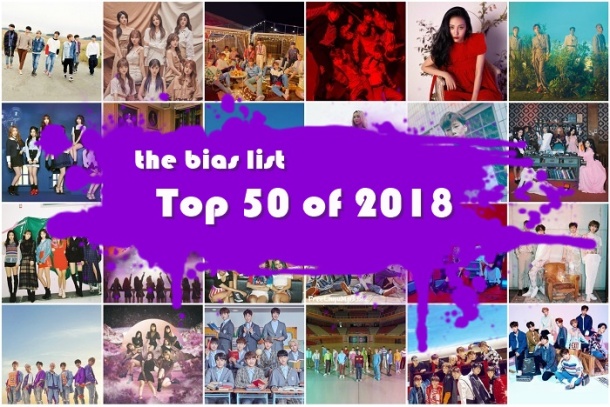 The end of the year countdowns are finally here! As always, things kick off with the big one… The Bias List’s top 50 songs of the year! Each day this week, I’ll be counting down ten of the year’s best, until number one is revealed on Friday.

Curious about last year’s countdown? Check out the masterpost here!

In a year where tropical pop wore out its welcome, SHINee proved that they could resuscitate even the most stale of sounds. I Want You‘s trendy bounce benefits from the group’s layered vocals, quickly transforming into a summer anthem. (full review)

Transitioning to a darker sound, Astro harnessed a familiar EDM ballad structure but twisted it just enough to fit within their melodic pop discography. I was a skeptic at first, but the track boasted unexpected staying power. (full review)

After a series of tropical-tinged singles, Soya blew things wide-open with the anthemic disco of Artist. If you’re not sold by the sky-high, propulsive chorus, that unabashedly over-the-top guitar solo will get you. (full review)

Many of 2018’s best title tracks came from groups who could barely afford a big, glossy music video. Such was the case with O.M.G., which is every bit as funky and assured as a world-conquering single by Seventeen or EXO. (full review)

26. GFriend – Time For The Moon Night

Moon Night marked the first time GFriend strayed from longtime collaborators Iggy & Youngbae on a title track, and thus required a learning curve of sorts. But, its gentle symphonic arrangement proved to stand the test of time, swelling with an understated beauty. (full review)

Though BBoom BBoom was the track to put Momoland on the map, BAAM was the rare retread that improved on its predecessor. The dance beat is louder, the chorus more exuberant, and the energy more hopelessly infectious. (full review)

After a 2017 that saw them move from melancholic to powerful, Seventeen split the difference with the laid-back funk of Oh My! It was a sleeper summer hit, unveiling its charms more convincingly each time it played. (full review)

If there was any doubt of BTS’s international appeal going into the year, Fake Love‘s unprecedented success proved they were ready to conquer the world. Its rock influences and serpentine hook recalled their very best material, while its striking moodiness felt perfectly attuned to today’s trends. (full review)

Infinite’s leader had one last gift for fans before his mandatory military enlistment, and it came in the form of a straightforward, indie rock power ballad that acted as a killer spotlight for his inimitable voice. (full review)

Dejavu took 2018’s groovy, inverted chorus trend and coupled it with some of the summer’s most sly hooks. Bookended by more powerful singles, its restraint paid off and resulted in the year’s biggest slow-burn earworm. (full review)