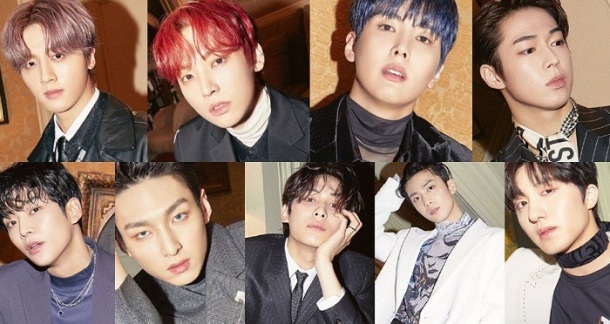 The release of a group’s first full-length album is a big deal, but the roll-out for SF9’s First Collection has felt simultaneously rushed and muted. Today was an especially confusing landmark, as we received the track list, highlight medley and music video all within hours of each other. And, the album’s not even out until Tuesday! Regardless, I’ll take new music where I can get it.

I think it’s safe to say that this groovy, deep house influenced sound is now officially a big trend in K-pop. Good Guy packs no new punches, but rides on the success of its funk energy. Its opening had me worried, as this kind of fractured synth backdrop tends to support way too many angst-filled boy group tracks. But, the instrumental soon comes to life as house piano and percussion are added to the mix. This culminates in the kind of beat drop hook we’ve heard a lot over these past few months. However, this is a musical turn that I’m not quite exhausted with yet.

From a production standpoint, Good Guy feels like something we’d find on a Seventeen or Nu’est album — a little brother to Love Me or Lucky. Even the vocal layering is reminiscent of the Pledis sound. Melodically, there’s not as much meat on its bones. The simple chorus works, but just barely. The verses are murkier. They’re well-delivered, but don’t spark with the kind of hookiness I look for in this style of a song. Luckily, the sprightly instrumental helps to cover these flaws, keeping the tempo high throughout the entire track. In a K-pop world of trap breakdowns and future bass lurches, this alone is enough to make Good Guy an early 2020 highlight.