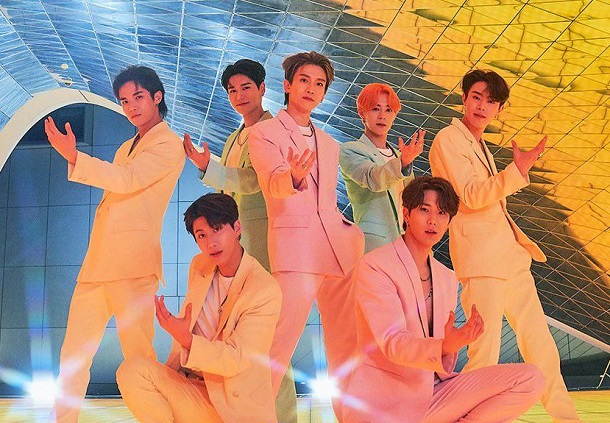 Though I didn’t love BTS’s Dynamite as much as others seemed to, I have to thank it for helping reinvigorate K-pop’s interest in bright, disco-inspired songs. Groups are starting to ditch their dark, harness-heavy costumes for pastel suits, bringing a greater sense of balance to the boy group ecosphere. Great Guys’ new single Touch By Touch clearly draws inspiration from Dynamite’s funky energy, but I find it to be an even more satisfying song.

The music video embedded below uses the track’s English version, but I’ll be ditching that in favor of the Korean recording. The English is just too distracting, and I find myself spending more time trying to discern the lyrics than enjoying the groove. That issue aside, this is my kind of frothy dance track. The synths are so bright they’re gleaming, the brass section is exuberant, and icy strings tug on the instrumental just in case it gets any crazy inclination to slow its brisk tempo.

Touch By Touch’s melody echoes this sense of carefree glee. I love the interplay of its chorus, opening with a playful, descending melody before punching back with the rhythmic “touch by touch” hook. I could do without the cutesy exclamations that pop up here and there, but otherwise the structure is streamlined and spry. A song like this doesn’t feel particularly momentous – especially stacked against comebacks that opt for more dynamic arrangements – but it’s hard not to smile when every element is so giddy and eager to please.

**EDIT: There’s now an mv for the Korean version! I’m embedding that one first, with the English below: