Over the past three weeks, we’ve been voting on a series of K-pop summer songs. Throughout the match-ups, we’ve seen titans fall and underdogs rise. It all culminated in yesterday’s final battle, where SHINee’s View went up against Golden Child’s Let Me. So… which track won?

Well, the Goldenness have descended.

I guess I shouldn’t be surprised, being a proud member of the fan club myself. I clearly have a lot of like-minded readers (and twitter followers!). Fandom loyalty is a powerful thing, as a retweet campaign powered Let Me to unexpected victory after initially trailing View by double digits. The final tally stands at 59.8% to 40.2%.

As for me, I’m of two minds about this result. Obviously, I’m thrilled for my favorite new-gen group. I adore Let Me, both as a summer song and a pop song in general. I really can’t complain about its victory. In fact, I wouldn’t complain about any of the songs in the bracket taking the top spot.

At the same time, I’m irritated that this bracket (as with everything in K-pop) ultimately turned into a fandom pissing contest. It only reaffirms my choice to keep The Bias List a site that focuses on music over fandom.

In case you’re curious, here’s how I would have ranked the songs in this summer bracket, had I been able to vote. This is my ranking based on “summer song,” not “overall favorite song.”

I hope you all enjoyed listening to some great summer songs and rallying around your favorites! 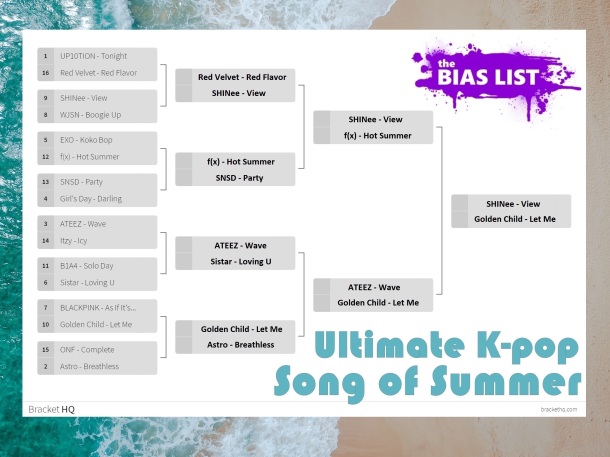