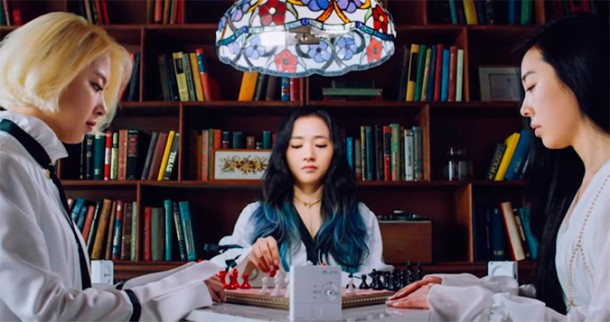 It’s almost impossible to separate Ladies’ Code’s new material from the horrible tragedy the group suffered in September of 2014. But, it’s not fair to base all further perceptions of their music on that tragedy either. I’m sure they don’t want to be known solely for their story, so I’ll try as much as possible to focus my thoughts on the merit of Galaxy as a song, and not as a tribute or statement (though it functions brilliantly, and subtly, as both).

Musically, Galaxy is incredibly subdued, marking a sharp turn from the peppy, uptempo sound that defined many of their title tracks in the past. The instrumentation lends the song a smooth, jazzy feel — a sort of modern take on electronic lounge music. This isn’t a particularly common genre in the realm of kpop, and the girls score extra points for attempting it. It’s also not a genre I’m especially fond of, so as much as I can appreciate the lush production, it’s just not a song designed for my poppier preferences.

That said, it’s worth focusing specifically on that aforementioned “lush production.” Galaxy is really a song that benefits from headphones. It’s an instrumental that demands you dive in, completely submerge yourself, and swim around a little. It may be hazy and sleepy — all brushes of high hats and percolating, water-droplet beats — but its not without its own sense of weight and purpose. Repeated listens bring out the nuances of the hooks, and the chorus (which at first seems inconsequential) begins to stick. It seems a fitting, mature return for a group we’ve been missing for too long.