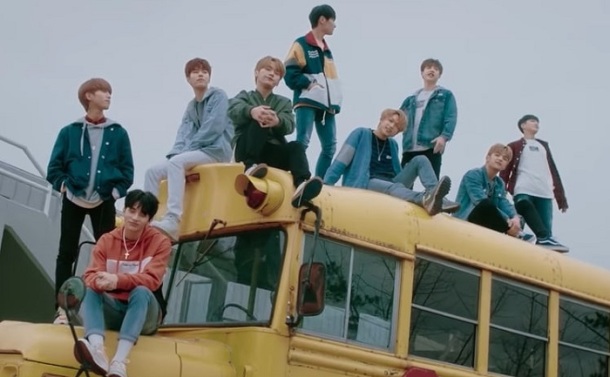 For some, the heavy rock/hip-hop assault of Stray Kids’ District 9 may have felt too noisy and unrelenting. In my case, the song is only improving with age, and has quickly cemented these rookies as an exciting (and needed) burst of energy within the 2018 k-pop landscape. But as strong as their debut is, the wistful Grow Up (잘 하고 있어) may have even wider reach, as the guys display a softer side and prove their versatility.

Like iKON’s 2015 pre-release My Type, Grow Up doesn’t hit you right away. Its soft, hazy approach lacks the kind of bombast or instant gratification hookiness that defines many title tracks. However, further listens allow the song to ingratiate itself more and more. Opening with a whistled refrain that quickly blossoms into a chorused chant, the instrumental conjures laid-back, late summer vibes. Nothing feels rushed or unsettled or even particularly ambitious. It’s simply an easy, head-bobbing melody that’s pure enough to succeed without all the requisite bells and whistles. The fact that a group this young is composing material that pulls from so many classic touchstones is very impressive.

Grow Up does a solid job shining equal spotlight on the group’s vocalists and rappers, melding its tonally diverse hip-hop verses with a straightforward pop hook. The post-chorus chant offers a hint at how stunning Stray Kids’ vocal blend may turn out to be, even if their music’s focus on hip-hop doesn’t always let them show this off. They were wise to debut with a track as ballsy and ear-catching as District 9, and I’m desperately hoping that they push even further with their rock-tinged sound. But, it’s also promising to watch them pull a complete 180 and deliver a follow-up as refreshing as this.