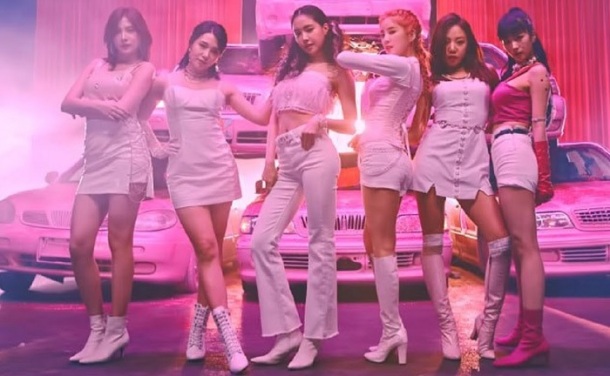 Apink have never been out of the spotlight for long in Korea, but they enjoyed an unexpected bump last summer with the ear-catching I’m So Sick. Heading in an edgier dance direction turned out to be a boon for the girls, so it’s no surprise that new single %% (응응) once again enlists production team Black Eyed Pilseung for an atmospheric, synth-fueled comeback. But while the song takes many of its cues from Sick’s template, it can’t quite match the effortless appeal of its successor.

That isn’t to say that %% is in any way a failure. Its primary job is to maintain and build upon Apink’s new sound, and it certainly accomplishes the task. Opening with a brief distorted vocal sample that becomes one of its signature hooks, the instrumental quickly rushes into a swirling synth arpeggio that previews the standout pre-chorus that is yet to come. Like I‘m So Sick, the instrumental choices are spot-on, and quickly establish an ultra-cool tone that mixes the retro with the modern.

If %% faces any obstacle, it’s in the form of a vague chorus. Not every pop song has to be hit-you-over-the-head catchy to be a success, but %% could’ve done with a stickier hook at its core. What we get is breezy and refined, but not as memorable as the best Apink title tracks. Luckily, the song’s endlessly evocative atmosphere helps to compensate. Around every corner are wisps of robust background harmonies, fitful shifts in percussion and splashes of sophisticated synths. That’s enough to get %% across the finish line, and should maintain the momentum the girls began to harness last year.