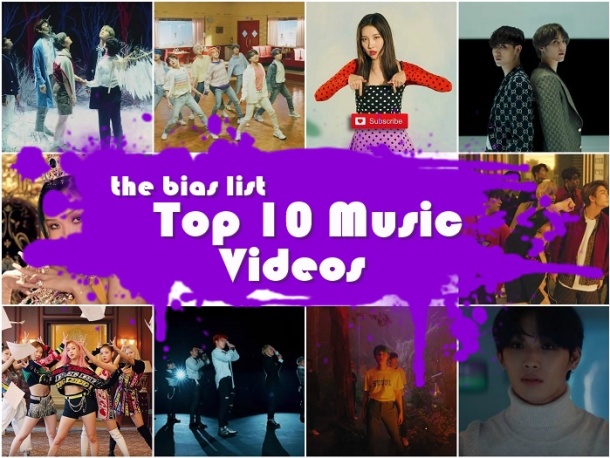 This is always one of my favorite end-of-year posts, as if gives me the chance to write about a vital facet of K-pop that I rarely touch on throughout the year. Visuals can make or break a song’s legacy, and these ten videos helped to improve and expand their already-strong soundtracks.

A showcase for Hwasa’s insane charisma, in which she chides and teases a foolish lover while wearing some of the most ridiculous K-pop fashion of the year. The simple set design and monochromatic colors ensure that the eye is drawn exactly where it should be.

Magic Island is a long-form mini movie, as obtuse and dreamlike as anything that Big Hit releases. And though the actual song is only a small part of the experience, the entire thing is shot beautifully and structured like chapters in a book. Amidst the ghosts and dragons and forest fires, the video presents a touching allegory about the coming-of-age of its protagonists.

The camera is in constant motion for Focus On Me‘s beguiling video, pulling out to give the illusion of a one-take performance. The set design is gorgeous, utilizing bold colors and empty space to enforce the song’s directive and showcase the duo’s understated choreography.

Shot like a big-budget sci-fi movie, We Must Love picked the perfect locations for its dramatic storyline. There’s some brilliant imagery here, from an old dragon temple, to a shower of falling stars, to that sterile, blue-lit hallway. The video has even more resonance after Laun left the group this August.

Stray Kids open Miroh by disrupting the system, staging a well-organized coup. We then move to a rooftop performance, surreal in its use of digital effects and lighting. The overthrow quickly turns into a big party (because… of course it does), complete with neon face masks and disruptive dancing in the streets. It’s a galvanizing bit of nonsense that fits the song perfectly.

Dear Love‘s sci-fi conceit nails a sense of loneliness and renewed hope, climaxing in one of the year’s most dramatic turns. It’s a simple storyline, but one that matches the heft of the song while simultaneously vaulting it to a new level. There’s just enough fantastical influence during the video’s second half to keep viewers guessing and coming back for more.

Sunmi is no stranger to this particular countdown, but Noir might be her most biting work yet. Lampooning the ‘like’ culture of social media while at the same time reveling in it, she’s managed to create the exact meme-worthy piece of pop art that she’s criticizing. At the same time, the video is delightfully surreal, adding needed humor to a seriously messed-up situation.

ICY was the best, most concentrated delivery method for idol group charisma this year. It’s basically just three minutes of ITZY terrorizing downtown Los Angeles, but it’s shot with such verve and energy that it quickly takes on a life of its own. The splashes of animation and bold costuming add a cartoon-like appeal, but it’s the girls’ fearless personalities that really stand out.

Recalling the quirky work of Wes Anderson, as well as the surrealist, effects-driven productions of early film pioneer Georges Méliès, Nap Of A Star knows its influences and revels in them. It succinctly laid out TXT’s debut-era concept, painting the boys as outcast creatures in a starlit forest. The stop-motion illusion is brilliantly done, but the emotive storytelling is what makes this surprising and compelling. It’s the most idiosyncratic video of the year, with absolutely gorgeous set design and a sense of unlimited imagination.