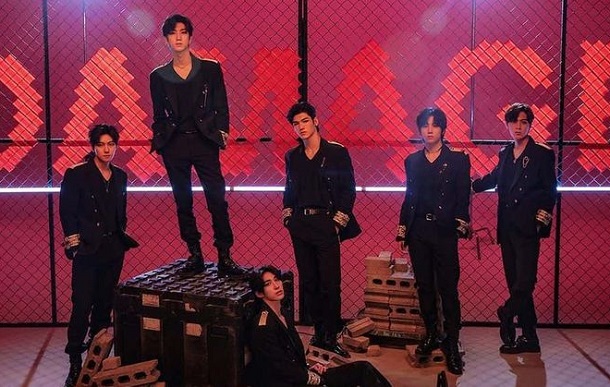 Like many newly-debuted groups, Just B boasts a line-up of familiar faces. Its members have established some notoriety through variety programs I-LAND (Geonu, JM), Under 19 (Bain, DY) and The Fan (Lim Jimin). Given this built-in fan base, their debut arrives with heightened expectation. And with word that title track Damage would be co-produced by B.A.P’s leader Bang Yongguk, curiosity reached a peak.

While Damage may not bring anything new to the overcrowded boy group table, it pulls off its familiar tricks very well. If an act is going to debut with this kind of overdone “dark” concept, they had better bring the drama. Damage heaps theatrics onto its EDM frame, with a chorus anchored by a hefty slab of synth and distorted choir of vocals. This overwhelming production makes up for the fact that the hook is little more than a simple chant repeated with panache. K-pop has always had a way of taking simple elements and making them sound larger than life, and Damage does this in a very satisfying way.

While the chorus stands as an obvious highlight, the song’s verses don’t simply fade into the backdrop. Damage opens with a catchy vocal hook that weaves its way through much of the track, helping to forge its chant-along fervor. Throughout the bombast, the guys’ vocals are placed front and center. They sound fantastic, especially when layered during the verses’ more rhythmic moments. A few descending spirals of melody give these segments plenty of movement and spontaneity, without making the song feel like a random hodgepodge of refrains. It all adds up to a polished debut, immediately establishing Just B as a rookie group to watch.