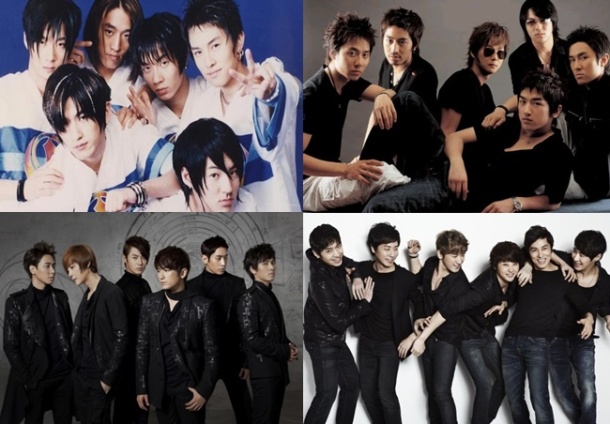 Mention the name Shinhwa and most people will immediately think: “k-pop’s longest running boy band.” It’s quite a title, and also quite an accomplishment for any group. Shinhwa debuted in 1998 and have remained strong since, reinventing their sound several times over amidst label changes and military conscription hiatuses. They now stand as a beacon of hope for every young group out there. K-pop can endure longer than 5-7 years. Groups can actually become lifelong friends. After more than thirty singles, Shinhwa has proven that. So which is their best?

Offering a slicker pop sound than Shinhwa had presented thus far, Wild Eyes set the template for many releases to come. Its stuttering lite-r&b is definitely of an era.

Built almost entirely on Tchaikovsky’s Swan Lake melody, T.O.P offers a distinctive, orchestral midtempo entry for the group that sounds unlike anything else in k-pop.

Returning after a four year absence, Venus reinvented the group in stunning electro pop fashion, officially bringing them into the new decade.

The group’s debut single, and one that has become representative of late 90’s k-pop. Its lulling, softly anthemic chorus is one of the genre’s classics.

Taking on a slinky r&b dance style, Shinhwa once again reinvented themselves and proved that they can pull off this sound and image just as well as their younger competition.

Moving on under a new label, Brand New represented the first major step post-SM, and remains one of their strongest singles thanks to its strings-assisted refrain and chugging beat.

The group’s best, most anthemic ballad. Memory soars with emotion that could have only been delivered by veterans of Shinhwa’s stature. Its chorus absolutely soars.

The pinnacle of Shinhwa’s SM material, Perfect Man perfects the millennial boy band sound, pulsing along a polished funk groove. But the real star is the song’s megawatt chorus, which stands as one of the group’s catchiest.

After reinvigorating their sound a year earlier, Shinhwa went one better with the immense This Love. The track’s anthemic club sound stands as their most powerful moment, pulsing with dance floor bliss. Nothing about the song is particularly complicated, but each segment ties brilliantly together, culminating in the sky-high, euphoric chorus.

11 thoughts on “The Top Ten Best Songs by SHINHWA”