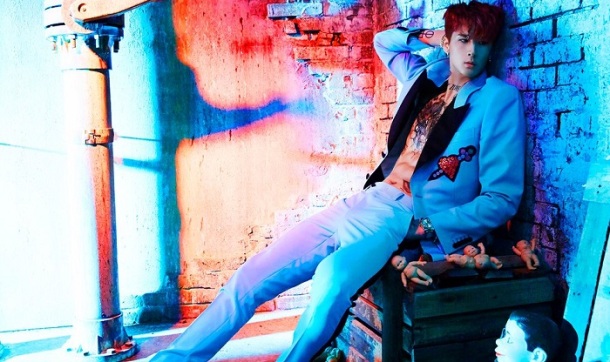 As much as I love VIXX, Ravi’s rap verses have often been my least favorite part of the group’s songs. I know that he has his (many) fans, but I’ve just always found his style to be a little corny and overbearing. Because of this personal bias, I can’t say I was exactly thrilled to hear an entire solo album of this sound.

Ravi’s no stranger to solo material, but Bomb feels like his first proper launching pad for a parallel career as an idol rapper. As launching pads go, it’s certainly a brash one, bursting out of the gate with an aggressive, theatrical beat. The song opens with an ultra-cringey English-language introduction before seguing into its shout-along, window-rattling chorus. Based on the teaser alone, I thought this hook would grate much more than it does. As much as I may not appreciate Ravi’s style as a rapper, there’s no denying that the commanding deepness of his tone packs a punch. It may not be a punch I’d listen to all that regularly, but it’s a punch nonetheless! And more importantly, it separates him from the artists he’s most likely to be compared with — namely, G-Dragon and Zico.

Free from the restraints of his group’s poppier material (much of which Ravi had a hand in composing), Bomb‘s verses flow more effectively than I would have expected. San E feels a bit misplaced, though his lighter, playful tone offers a nice contrast to the pure fire-and-brimstone bombast of Ravi’s performance. As a hype track, Bomb doesn’t transcend his place as an idol rapper, but its undeniable energy goes a long way in covering the track’s more regrettable moments.