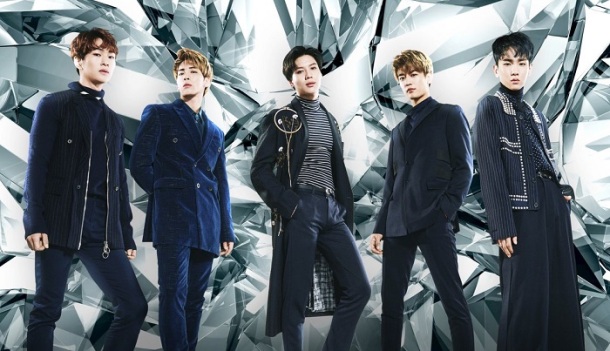 Shinee‘s j-pop material has always been stronger than many of their peers, but their new album Five is especially solid. Bolstered by a heavy dose of bombastic funk, most of its tracks see the group moving towards a big, uptempo party vibe that contrasts with their more experimental, nuanced work last year in Korea.

Get The Treasure leads the charge, bursting out of the gate with the song’s biggest refrain — a potent call-and-response chant that practically begs for audience participation. A supple funk beat drives the verses, underlined by insistent rhythm guitar. When the chorus hits, it’s ushered in by a veritable wall of brass, giving the track a classic, throwback vibe. The vocals here are a real treat, just on the verge of falsetto. It’s a slight departure for Shinee, yet fits perfectly within their sound. Very few groups (Korean or Japanese) possess the variety of vocal tones that Shinee has, and they’re used smartly here, giving the chorus a dynamic, textured appeal.

While the central melody lacks just a bit of the punch that their brilliant Kimi No Sei De gave us last May, Get The Treasure feels almost like a sequel. Taken in tandem with the rest of the album, it’s a promising direction for their Japanese material. The track’s only real clunker moment is its middle eight rap break, which throws in a little too much English at the expense of sounding cheesy and reductive. It doesn’t totally derail the song’s momentum, but slightly sabotages its swagger. Luckily, that powerhouse chorus swiftly returns to set things right again.

2 thoughts on “Song Review: Shinee – Get The Treasure”