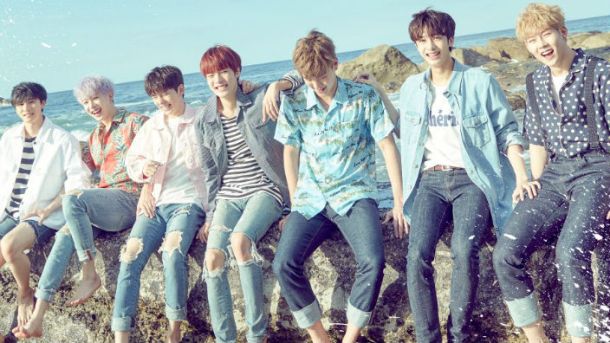 I wasn’t sure that we’d ever get to hear Monsta X‘s version of a fun, upbeat summer single. Their album material has been relatively varied, but when it comes to singles the group has more-or-less stuck with a harder-edged hip-hop sound. This has brought them a sizable fan base, even if it doesn’t always appeal to my taste. Newton, on the other hand, was tailor made for the melodic pop loving crowd, giving Monsta X a chance to branch out with a style they’ve yet to attempt.

Newton would be all the better if the group had completely fallen into the song’s melodic side, rather than shoehorn in a couple of awkward rap verses that contrast with the track’s carefree vibe. Of course, Monsta X was never designed to be a Snuper or Astro, so I get why keeping pieces of their individual color was important. But even with its occasional missteps, Newton is a jubilant display of pop melody that adds to this year’s growing summertime k-pop playlist.

In many ways, the song hearkens back to a simpler time in k-pop. Nothing about Newton is trying to be a trendy, overly-discussed-on-fan-forums event. It’s just a solid pop song delivered by a group who knows what they’re doing. Sometimes that can be the perfect breather between heavily scrutinized comebacks and demanding dance routines. There have certainly been more striking melodies so far this summer, but it feels like Newton will hold up in the long run because of its simple, timeless appeal.