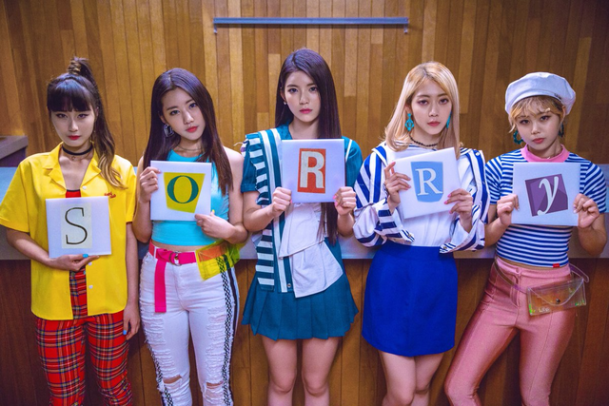 Rookie group Girlkind debuted earlier this year with the hip-hop heavy Fanci, which displayed promise even if the song itself left something to be desired. I guess the girls felt embarrassed for sticking that “i” in place of the standard “y” in their title, because they spend most of follow-up single S.O.R.R.Y simultaneously apologizing and proving that they can spell.

But of course, a pop song is not a spelling bee, and S.O.R.R.Y’s opening minute is utterly baffling. The track begins with a standard (ie: budget) tropical synth loop and goes on to place its monotone “s-o-r-r-y” hook over the top. This simple refrain would have worked fine in moderation, but the girls repeat it for a full third of the song’s running time before moving on to new territory. It almost feels like the producer forgot to take their finger off a button somewhere, and its repetitiveness undermines any power the earworm synth riff might have had.

When we do finally transition, it’s in the form of a heavily filtered rap verse. The vocal production here seems off, and blunts the force this segment was going for. It’s frustrating, because the girls come across as a less-polished 2NE1. Given the right material and producers, their rough-around-the-edges appeal could easily be transformed into something exciting. But with bargain-bin material like this, the group seems destined for obscurity. And that’s truly something to be s-o-r-r-y for.