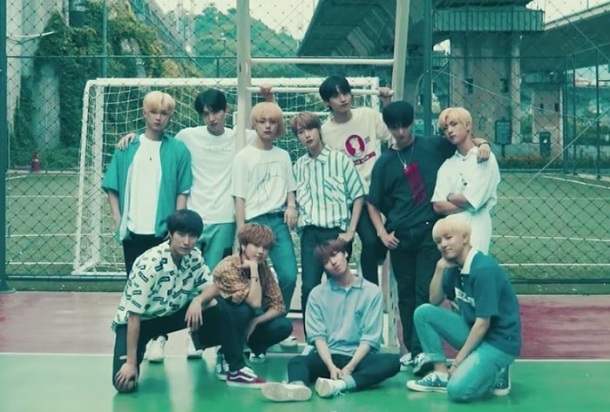 In a wonderfully K-popian move, RBW Entertainment is embarking on a year-long project to debut two new groups — a dance act (ONEUS) and a band (ONEWE). To kick off this ambitious roll-out, the guys have combined for an anthemic duet. Last Song plays more strongly to the band side of things, but presents a promising taste of what might come later.

The song adheres to a certain genre of fist-pumping, rock-infused pop that instantly appeals to my taste. Its first verse feels ready for stadiums, chugging along with a steadily growing power. The chorus crests in the way you’d expect, raising the tempo and upping the emotion. Yet, the melody itself feels slightly underwhelming. Things don’t quite explode in the way I wish they would. The guys sound terrific, but the song doesn’t build to the kind of standout moment that might truly harness their potential. I suppose that could still come later, given that this this “I Shall Debut” project is scheduled to last so long.

Taking a cue from the YG production template, Last Song climaxes with an additional chant-along hook. Its upbeat drive works well in the context of this style of song, and salvages some of the missed opportunities that came before it. As far as un-promoted OST-esque singles go, this is still an undeniably strong effort. I just hope they take this sound and break it fully open for subsequent releases. We certainly need more rock influences in K-pop.