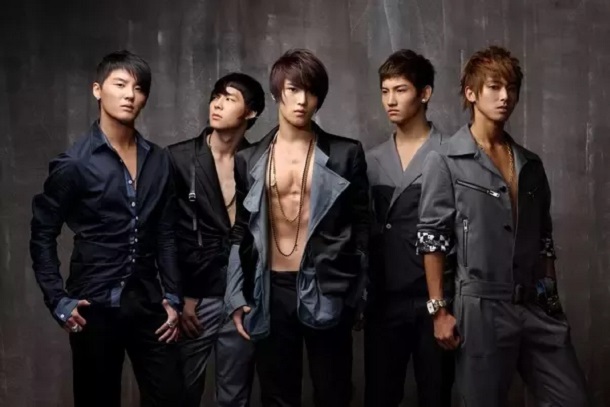 It’s relatively common for a K-pop single to be re-recorded and released for the Japanese market, but the opposite rarely happens. When it does, I usually default to the Korean version – even if it came after the original. Such is the case with TVXQ’s Purple Line, whose Japanese recording was unveiled a week before the Korean single. And while it has a place on Japanese album T, Purple Line is one of the few TVXQ singles that doesn’t appear on any of their Korean albums.

Instead, the song acts as a bridge between 2006’s “O”-Jung.Ban.Hap and 2008’s Mirotic. As with many of the group’s big singles, Purple Line is a Yoo Young-Jin composition. And while it’s not as bombastic as Rising Sun or “O”, the track’s forceful percussion and skittering melody are very of its time. As with many Young-Jin tracks, Purple Line is incredibly rhythmic, driven by an impish performance style that sees the guys warp their voices in an almost comical way. However, a generous dose of vocal layering and harmony helps to give the song some weight.

Purple Line’s chorus is one of those effortlessly catchy hooks that sticks after just one listen. Essentially, its melody just traces the instrumental, but when the two combine the result is compelling. This is largely due to TVXQ’s robust vocal blend, which gives the refrain a towering – almost overpowering – appeal. This is made even more dynamic as the track moves into a last-minute key change. To me, Purple Line feels like what the early-00’s American pop boom might have morphed into if it hadn’t been replaced by other trendy genres. It’s simple, but potent. It’s capital “p” Pop music, taken seriously.