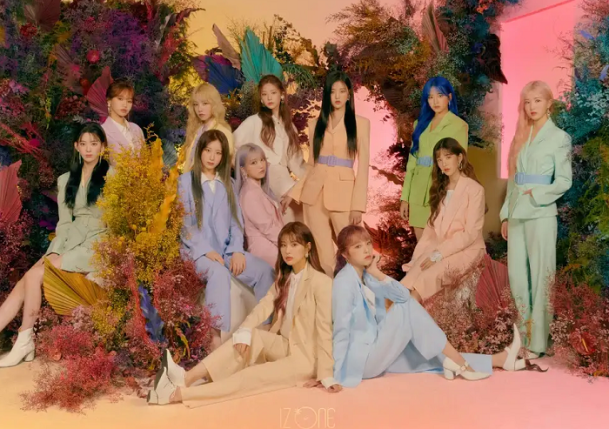 Originally scheduled for release last November, IZ*ONE’s BLOOM*IZ album has become something of a K-pop holy grail. With MNET’s Produce 101 scandal sending its related groups into disarray, it seemed as if the music might never be released. But, while boy group X1 bore the brunt of the controversy and ended in disbandment, IZ*ONE have moved forward. Judging by their album’s instant success, the music-buying public is willing to forgive and forget – especially since the girls themselves weren’t at fault.

New single Fiesta arrives after 2019’s dynamic Violeta, and follows much the same trajectory. This time, none of the elements are quite as strong and the template feels a lot more familiar. It’s a solid track, but like so many recent K-pop offerings, I feel like I’ve heard every one of its tricks before. This sense of ‘been there, done that’ occurs immediately, as the instrumental lurches to life with the same synth textures that have underlined dozens of songs this past year. At this point, it feels like every K-pop producer is pulling from the same sampler pack of loops. Fiesta would have been much more potent with a complete instrumental overhaul. It needs a unique calling card of its own.

The song’s steadily-building arrangement reminds me of Cosmic Girls. IZ*ONE deliver a chirpier performance, without the benefit of a power vocalist like Yeonjung who could have rattled off a few huge notes to give Fiesta a sense of climax. Instead, the heavy lifting is accomplished by a noisy post-chorus synth drop that is sure to polarize. I don’t mind it so much, but I wish the actual chorus was a little stronger. As always, I crave a more fully fleshed-out melody instead of the overstuffed sing-talk phrasing that makes up nearly the entirety of Fiesta. Its briskness and energy cause the track feel catchier and more satisfying than it actually is. That deft sleight of hand makes it hard to hate, but also leaves a frustrating aftertaste.