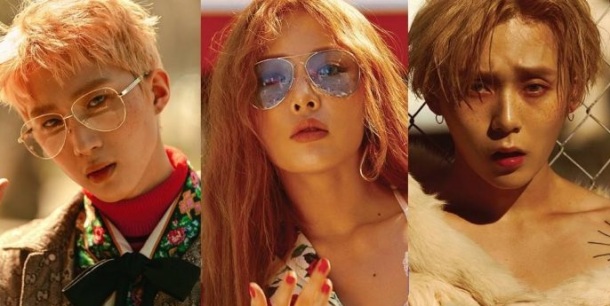 When it comes to Triple H’s sub-unit debut, more will probably be made of the controversial music video than the song itself. I don’t tend to write extensively about videos, but 365 Fresh is definitely one of the more memorable ones in recent memory. I’m not sure romanticizing things like suicide and drug use is a good thing, but the video is so over-the-top that it makes for a compelling, highly entertaining watch.

Triple H consists of solo star HyunA, paired with Hui and E’Dawn of boy group Pentagon. On paper, this combination doesn’t seem particularly striking — especially since the trio are essentially filling the very big shoes of the former HyunA-duo Troublemaker. But both visually and aurally, it really works. 365 Fresh reinvents Bruno Mars’ retro 24k Magic for the k-pop market, leaning heavily on its synth-powered 80’s funk/soul groove. While this is obviously derivative, it actually feels kind of daring for Korea. The instrumental never strays far from the central drum pattern that opens the track, but the riff is funky enough to power the entire three-and-a-half minutes. Touches of guitar and brass add to the live band feel, with a series of soulful background vocals providing great warmth and texture.

HyunA is always a scene-stealer, but it’s actually the guys that deliver 365 Fresh‘s best moments. Hui’s pre-chorus is especially effective, briefly introducing a touch of soaring melody to a song that relies more heavily on a sense of swag than pop hooks. E’Dawn’s higher-pitched tone compliments the track’s breezy, summertime vibe, interacting well with HyunA’s charismatic delivery. It all adds up to a release that manages to feel both laid-back and slightly debauched. I wasn’t expecting much from this sub-unit, but 365 Fresh is a pleasant surprise.