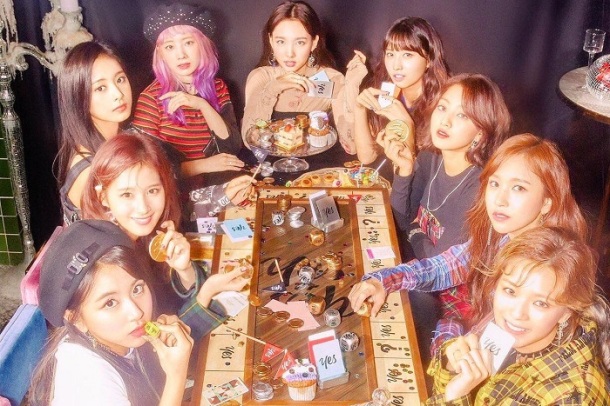 Whenever a group is as active as Twice has been this past year, they run the risk of succumbing to listener fatigue. Between Korean and Japanese releases, the girls’ brand of quirky cute has been omnipresent. I was never predisposed to enjoying this sound in the first place, so a steady stream of it has been kind of exhausting. It’s also hard to keep up the quality when making such frequent comebacks. Twice’s title tracks have always been solid when working with producers Black Eyed Pilseung. But when they move onto other collaborators, things become more hit and miss. So with all this in mind, my excitement level going into Yes Or Yes was pretty much zero.

However, I’m happy to report that Yes is a pleasant surprise. It’s a well-developed pop song that matches Twice’s unique style to a tee, and it’s the strongest they’ve sounded all year. Its concept is problematic — especially in the era of consent brought forth by movements like #MeToo — and I wish the song’s awful spoken introduction had been deleted entirely. But beyond that bit of tone deafness, we find a pleasingly melodic track that largely avoids coasting on aegyo and catchphrase hooks.

Yes Or Yes’s opening verse is one of its strongest segments, melding the clipped delivery of past Twice tracks with a more mature melody. This pattern mostly repeats for the second verse, following a catchy bit of sing-song hip-hop to keep things fresh. The chorus is fleshed out in a way few of their title tracks have attempted, offering a trio of diverse hooks that move from sprawling power notes to a spunky chant before coasting into a playful post-chorus refrain. It’s all supported by a bright instrumental that blends fizzy summertime synths with rhythm guitar and galloping percussion. Twice’s music may never be entirely for me, but for now this skeptic has been won over.