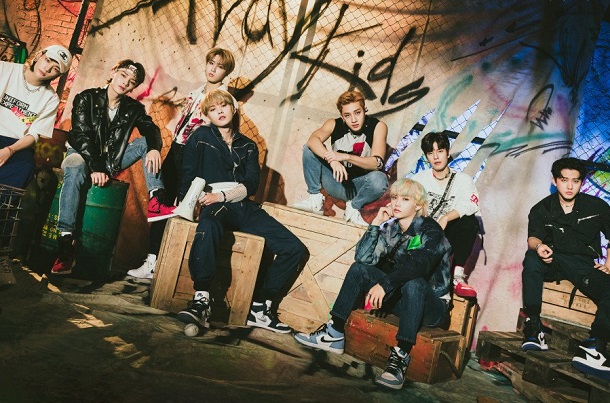 Stray Kids aren’t offering any respite for fans. Their newest album bore music video after music video, blurring the line between title track and b-side. Now, we have a new Japanese single. I’m sure hardcore followers are pleased by this rapid-fire blitz, but the sheer bulk of releases threatens of overwhelm us bloggers!

Either way, Scars is a sturdy – if unremarkable – addition to the group’s discography. They can rattle off this sort of emotional, mid-tempo, vaguely EDM track in their sleep, and there are already superior Stray Kids songs in this style. As regular Bias List readers know, I tend to prefer music that raises my spirits or energy. Songs I’d consider “mopey” or “angsty” don’t often find their way on my playlist. I may deliver a positive review, only to have the track slip from memory hours later. Scars fits in this category. The song is well-performed and well-constructed, but nothing about it makes me yearn for another listen.

Scars opens with a striking melody supported by minimal instrumentation. This puts full focus on the vocal, making for a compelling intro. From here, we move into the rap verse. Stray Kids are dynamic rappers, but I wish they would modulate their energy and flow for this song. They don’t always need to shout their lines to impart emotion, and Scars could have done with a steadier build. I’d say the same about the chorus, which buries the hook in too many layers of dull synth. The production even throws in a firework sound effect for good measure. But when it comes down to it, there’s not enough flesh on the song’s bones. Scars’ strongest moments are its most stripped back.