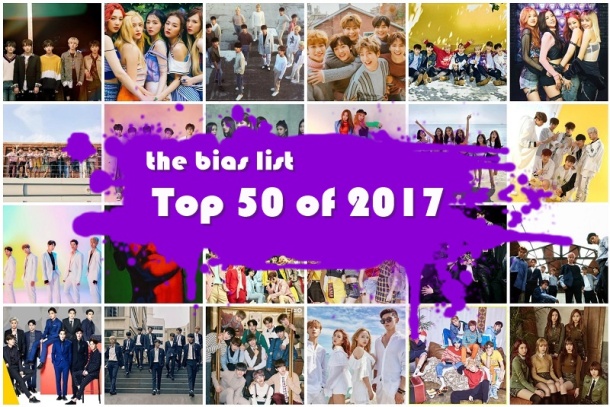 The Bias List‘s end of the year countdowns officially kick off tomorrow, and I’m starting with the big one. The first ten selections of my Top 50 Singles of 2017 will be unveiled on Monday, with ten more each weekday until the number one song is revealed on Friday. After that, I’ll be looking at this year’s top artists, albums, rookies, producers, music videos, album tracks, and more.

Basically, there will be more countdowns than anyone probably asked for — in addition to my regularly scheduled song reviews and features, of course!

2017 has been a strange year. No Infinite, no SHINee… but plenty of disbandments and member shifts. It was a year where k-pop embraced international trends, quite often to my own personal frustration. But in between the underwhelming moments, there were more than enough triumphs to create a very strong list of notable singles.

Before the first batch is unveiled, take a look back at my top 50 from last year, and take a listen to five songs that just barely failed to make this year’s countdown: