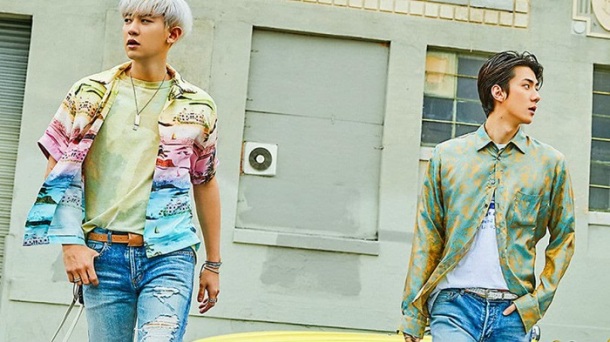 Before EXO’s Chanyeol and Sehun debuted as an official sub-unit, they paired together to deliver last year’s SM Station track We Young. That song offered a nice balance between hip-hop and harmonized melody, with a warm tone that took advantage of the interplay between the guys’ voices. This weekend’s pre-release Just Us 2 followed suit, though to a slightly less successful degree. Now, the duo have unveiled their album’s main title track, What A Life.

From the teasers, I already knew that I’d have a hard time getting into this song, and set my expectations accordingly. Its swaggy hip-hop sound is not for me, and I find its producers Devine Channel to be very hit or miss. But even with those low expectations, What A Life found a way to grate on every last K-pop nerve I have.

The song opens with this plonky, xylophone-esque synth that has become completely overused these past few years. That, combined with the insistent trap beat, makes for an instrumental that regurgitates the worst of today’s musical instincts. It’s a downright ugly sound, but would at least score some points if it felt the least bit original. Too many K-pop producers are seemingly pulling from the same pack of instrumental samples, and I can’t wrap my head around it. Don’t they want to be creative? Don’t they want to push things forward?

Chanyeol and Sehun do what they can with this meager material, but they’re up against a wall. There’s only so much you can mine from a slurred, sing-song chorus that sounds as if it’s on downers. They’re both fine rappers, but the entire arrangement is so murky and sluggish and unrelentingly dour. Without an interesting beat to ride, they’re relegated to posing and looking cool and not much else. They’re far more dynamic performers than that, and it’s a shame to see their potential wasted on material with such low ambitions. In a bitterly disappointing K-pop summer, What A Life is our lowest point yet. We can only go up from here, I suppose.