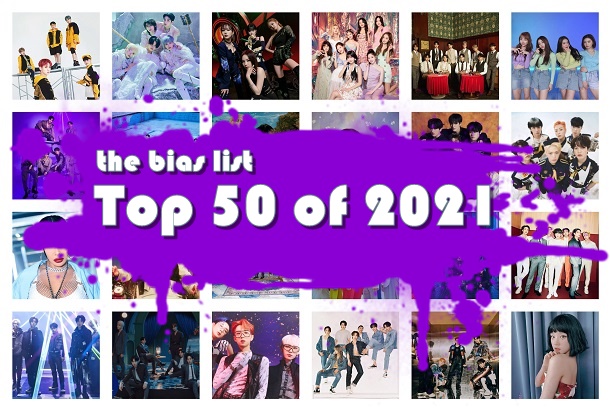 Golden Child paired their mini album YES with the perfect double shot of comeback promotions. Following on the heels of the emotional Burn It, Breathe bounds forward with an immediate sense of release. It’s stuffed with musical goodies and dynamic breakdowns, always circling back to its hearty, affable chorus. The guys may never return to the bright DamDaDis of the world, but Breathe proves they’ve still got that infectious touch. (full review)

It’s so important for debut groups to emerge with their own concept and sound, and Mirae’s Killa paved the way for a career of futuristic electro-drama. It remains to be seen whether the guys will fulfill that promise long-term, but for now Killa stands as 2021’s most exciting debut. It’s a feast of highlights, from its jagged dance beat to the lay-it-on-the-line finale (electric guitar! sky-high power note!) to the bludgeoning chorus. (full review)

Every year deserves its version of the “K-pop summer anthem,” and Brave Girls were more than happy to deliver. After their unprecedented resurgence, the gauntlet was thrown for a comeback that would cement their status in the industry. Chi Mat Ba Ram took everything that made Rollin‘ great and amped it up. It’s a shot of constant adrenaline, coasting along gorgeous brassy synth and powerful vocals. With all eyes on them, the ladies were unrelentingly fantastic. (full review)

It’s so fulfilling to watch an artist embrace their authentic musical color, and Key has certainly earned the right to do so. Fortunately, he and I share similar taste in genre, making Bad Love‘s majestic synth-pop a thrilling prospect. Key owns the style, commanding each moment with a robust vocal and innate ability to make the kitschy feel sublime. He wrestles with a melody that starts at “intense” and builds to “overwhelming,” never once forfeiting his place at the center of Bad Love‘s melodrama. (full review)

6. Brave Girls – After We Ride

What a genius move to counter the effusive Chi Mat Ba Ram with a melancholic, tears-on-the-dancefloor anthem. After We Ride hits all the right musical notes. It’s almost as if it was designed with my specific pop preferences in mind. Brave Girls pull back the idol façade and offer an unguarded performance. This vibe and emotion could’ve easily taken precedence over the song itself, but Ride is brilliantly melodic, climaxing in a whirlwind of wistful synth and guitar. (full review)

Oh, TXT. Angst suits you so well. Like a proud parent, many of us would happily shelter our cheerful Crown boys as long as possible. But, growing pains are bound to happen. When they do, we can only hope for a chorus as spectacular as LOVESONG. It’s an emotional frenzy of thundering percussion, abrasive vocals and moments of stark insecurity. Above all else, it’s a damn sing-along — and there are few things more cathartic than that. (full review)

What makes a K-pop legend? For me, an important ingredient is focus: the ability and desire to do what you do really, really well. I think we can all agree that no one does SHINee better than SHINee. Many have tried, but there’s something about these specific voices that transforms simple fare like Atlantis into larger-than-life, 4D entertainment. It’s utter spectacle, streamlined for ultimate concentration. Perched over an undulating bass loop, the track offers no respite from SHINee’s intense energy. You’re immediately snatched by their riptide and funneled through their kaleidoscopic world. (full review)

Some songs arrive just when you need them. At the end of January, we were approaching year two of our global pandemic, with vaccines still out of reach for most. The United States found itself embroiled in a transition of power fraught with frightening, violent disruptions of civil norms. As cheesy as it sounds, Burn It became an instant salve for me.

At its core, pop music is universal, and simple lyricism takes on weightier meaning. “We’re in the fire, you gonna be fine” isn’t exactly poetry, and in true K-pop form it’s grammatically dubious. But, it’s exactly what I needed to hear at the time. Too many idol group concepts revolve around how cool and badass their performers are. Precious little are genuinely consoling.

Of course, this would simply be another cliché pop lyric without Burn It‘s rousing energy. The song pitches its entire chorus as a series of unrelenting power notes. Raw emotion tempers into confidence, resolving in a forceful army of vocals. It’s not the least bit subtle, and that’s what makes it so satisfying. (full review)

Tension — sexual or otherwise — is an underrated facet of pop music. A great song clenches you in its fist and refuses to let go, loosening and tightening its grip for maximum effect. There’s danger lurking around every corner of libidO’s claustrophobic instrumental. The song throbs on a gritty bassline, but it’s just as effective during its emptier spaces. The group’s vocals fray at the edges, pulled apart and slammed back together. There’s a carnal glee running through this K-pop curiosity.

Yet, libidO never forgets to be a wondrous pop song. Its hooks are as sharp and menacing as that forceful crotch grab that punctuates the bridge. OnlyOneOf commit to a concept rarely seen in an industry seeking to balance edge with comfortable monotony. Love it or hate it, libidO is the year’s most idiosyncratic title track — a truly iconic moment for a group with unlimited potential and the nerve to pull it off. (full review)

Too often, modern K-pop tracks can feel like an assemblage of disparate pieces, connected (or not-so-well-connected) by the fluency of a group’s performance. Success is gained through the synergy of these pieces, but also through their individual potency. ONF’s Beautiful Beautiful is one potent firecracker after another. Yet, the sum still feels greater than the parts. In fact, I’m convinced you could smash this song into shards and re-form it any which way. There are simply no dead moments. No falters.

So, how do you find variety in a track that’s one extended exclamation mark? You hit the ground running with a “Brrram bbabam bbabam bbambbam” and hang weightless for a moment before slip-sliding through a playground of turbo-charged synth funk. A sudden swell lifts you back to the summit before the rushing chorus traces the contours of a spiraling funhouse slide. You hit another Brrram Bbabam Boost Station and swerve into a ‘now-they’re-just-showing-off’ a cappella breakdown heralded by generous shots of electric guitar.

You mix a few metaphors along the way, but you’re disoriented! Who can blame you?

When it comes down to it, no other 2021 K-pop track gave us as much bang for our buck as Beautiful Beautiful. There were more daring concepts and more emotionally resonant performances, but Beautiful uncovered all the most treasured pieces and fused them into a shining bauble of a pop song. In its colorful, crafty way, the track offers an earnest sense of inspiration – a bold fantasyland accessible through the simple press of a ‘play’ button. (full review)