In my mind, April represents the beginning of k-pop’s peak season. From this point until the end of August, we’re in the prolific late-spring/summer comeback rush that tends to peak in July. Knowing this, I continue to feel underwhelmed by what 2018 has to offer.

It’s not that this year has been markedly bad. It just feels like we’ve gotten a lot of “good” songs without many total standouts. For some perspective on this, I want to call back to the “messy verses” post I wrote back in March. If this structural issue was a burgeoning problem then, it’s blossomed into an all-out k-pop pandemic now. To be honest, I’ve felt more disillusioned by the state of k-pop this past March and April than any time in recent memory. However, I have a feeling that it will only take one or two outstanding comebacks to reignite my excitement. They can’t arrive quickly enough.

Because of this low enthusiasm level, my favorite 2018 tracks have tended to be those composed by producers with a proven track record. Sweetune have been a godsend during our current climate of anti-melodic trap/EDM/future bass — as has Woollim Entertainment, who are shaping up to be 2018’s MVP agency.

This month’s top three includes a pair of energetic, melodic pop songs tailored to my personal taste, plus a good old fashioned grower that eclipsed many higher-rated comebacks as its charms continued to present themselves. I’m not completely enamored with the strength of these top songs, especially when compared to the Aprils of 2016 and 2017, but all three have a classic appeal that feels like an oasis amidst k-pop’s modern trends.

One name noticeably missing from my list? Unfortunately, it’s Snuper, whose Tulips is my biggest 2018 disappointment so far.

The Boyz – Giddy Up (review) 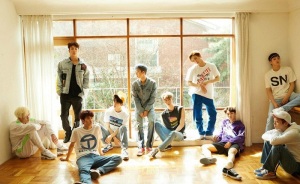