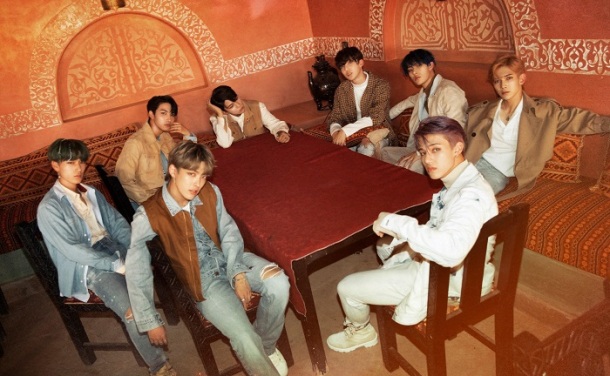 As Block B seems poised to move on to different things, their agency has debuted a younger brother group in the form of ATEEZ. Before even listening to their music, I assumed they’d be given a hip-hop sound similar to their seniors. But then I saw the name LEEZ pop up as a producer for every track on their mini album, and those expectations were blown wide open. LEEZ has been a frequent collaborator with girl group Dreamcatcher, who have pursued a hard rock dance pop style. Would ATEEZ wind up as some sort of cool metal/hip-hop hybrid?

With Treasure, that’s not quite the case. But, the song is a fascinating mixed bag of influences — some better used that others. I’m not a fan of stylistic autotune, and that effect is slathered all over Treasure’s languid verses. They’re pitched halfway between rap and vocal, and end up coming off as a lazy attempt to recreate the sounds of Western hip-hop rather than an interesting K-pop affectation.

However, as soon as we hit Treasure’s commanding chorus, all bets are off. The song takes a drastic shift into epic territory, as the group’s vocals layer over one another to create a towering sound. It’s not unlike EXO’s chant-heavy Mama all those years ago. Treasure’s hooks aren’t quite as exhilarating, but the ballsy, bombastic energy is there. This carries on into the song’s second verse, which briefly flips the arrangement to focus on a quirky, drum-and-bass influenced rush of percussion. This constant shifting of textures helps to cover Treasure’s more cringeworthy instincts. A gorgeously dramatic bridge offers the chance to showcase ATEEZ’s formidable vocals, making the misguided autotune we heard earlier seem even more pointless. Treasure is certainly not perfect, but it does the most important thing a debut song can do: it makes me curious to hear future material.